Rugs are a convenient asset to home and business owners to dress up a hardwood, even carpeted floor space, but they were not always used in this manner. Rugs started out as practical tools that were transformed into a well-crafted art form and later mass produced in the Western world. This opened the trade to many people who may not have been able to enjoy costly handmade imports.

Rugs were first made by nomadic people in central Asia for practical purposes. These rugs were mainly made of wool from the nomads’ personal herds of sheep. Their climate was cold making wool products perfect for their comfort and the warmth they provided families.

Asia has a long history of rug making, especially Persia. Every rug maker would have their own unique design motifs in each rug along with their own knotting technique depending on which town or city they were from. Rugs produced in a city would have floral patterns while rugs with a geometric pattern were typically made in small towns.

Rugs became popular products shortly after trade between Asia and Europe became more mainstream. Islamic prayer rugs reached a vast audience as the religion spread to Spain and Eastern Europe. During this time, merchants were trading rugs through Istanbul and exporting them for purchase in Venice, where they gained immense popularity with those of the noble classes in Italy. They began to take a liking to the beautiful rug designs, solidifying their place in European culture.

The 1900’s mechanization made rugs affordable for the average families in the United States thanks to Catherine Evans Whitener of Georgia. She was an amazing crafter who made bedspreads and rugs out of her home. Around 1930 the tufting machine was invented making Catherine’s chenille-style rugs incredibly popular in the common household. Synthetic rugs were introduced in the 1940s and 1950s and more than 90% of the rugs made today are tufted. 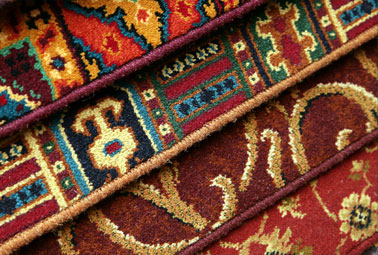